Evan Gaffney: The Given Day 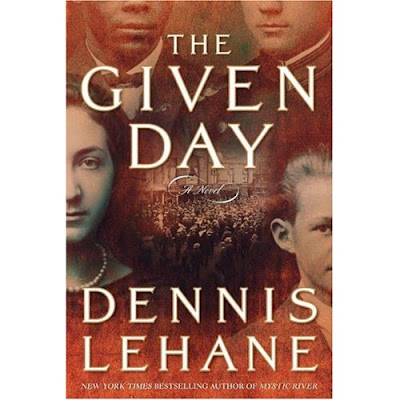 Set in Boston after WWI, this is the story of two families, one black one white, engaged in a battle for survival and power amidst all the crazy stuff that was going down back then. There's lots of famous peeps in the book, including Babe Ruth, Eugene O'Neill, W. E. B. DuBois, and the attorney general Mitchell Palmer - famous for his communist-hunting Palmer Raids. Is that Emma Goldman on the left?

Anyway, I think it's awesome looking. Love that green tinting on the photos turning to rust.
Posted by Tal at 10:24 PM

Evan Gaffney is the designer.

Not too sold on this, but then again, these are not the types of books I like to read and it looks like a lot of what's out there...

I don't think it looks like anything out there. The font choice is beatiful. And then it has this complex image processing that I don't see anywhere else outside of movie posters. It also looks immediately like a Ragtime-type novel, which makes it instantly recognizable to a large readership.

As a reader, I am annoyed when a cover depicts the fictional characters in a novel.

Hmmmm....I guess that's true. But when we were kids all our books had pictures of the characters, either inside or on the cover. It's as we got older that this became "taboo". I think it's nice to once in a while break the rules and show the characters. In this particular case, the images are historical and may even be celebrities of the period (we'll have to ask Evan). Remember the cover for Hayday - they had the male character right on the cover and female on the flyleaf:
http://www.amazon.com/Heyday-Novel-Kurt-Andersen/dp/0812978463/ref=pd_bbs_1?ie=UTF8&s=books&qid=1222834569&sr=8-1

I guess you're right. It is elegant and interesting with all the faces cut off like that. I guess I have seen faces on many covers and the treatment and coloring and font choices, while nice, feel fairly normal and safe. That's perfectly appropriate for the type of book it seems to be.

Things seems to get muddy in the center there... It does feel like a movie poster.

I think if this was a classy Pulitzer-Prize-winning Broadway play, this would make an awesome poster.

i much prefer the UK cover for this book.

I personally don't like it. The title type seems so unimportant - and the empty area to the right feels...empty.