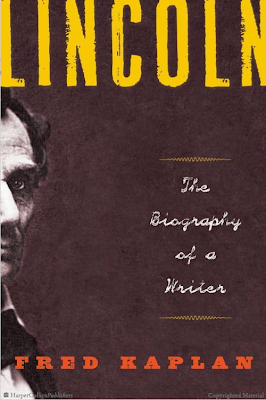 Winner of the Crop of the Year Award. Lincoln continues onto the spine, where he is tinted red.

The book chronicles Lincoln's language skills - he wrote his own speeches - in addition to love letters and other writings. It was his skill with language that shaped the nation's attitude towards slavery. And, a "...comic depiction of what happens when two people of the same sex are bedded has a heterodox clarity that reveals his familiarity with bodily realities..." :o
Posted by Tal at 2:05 PM 6 comments

Path to the Spiders' Nests 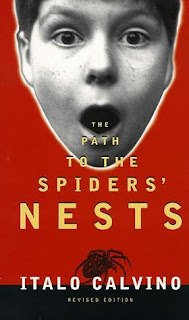 I saw someone reading this on the subway the other day. He was at one end of the car and I was at the other. Can it be said that a cover is successful if it leaps out at you from across a crowded subway? Anyone know who designed it?

Italo Calvino's debut novel, updated to include changes that the author made for the definitive Italian edition, previously censored passages, and his newly translated, unabridged preface. "The Path to the Spiders' Nests," written when Calvino was twenty-three and first published in 1947--tells the story of Pin, a cobbler's apprentice in a town on the Ligurian Coast during World War II. He lives with his sister, a prostitute, and spends as much time as he can at the lowlife bar where he amuses the grownups. After a mishap with a Nazi soldier, Pin becomes involved with a band of partisans. Calvino's portrayal of this band, seen through the eyes of the child, is not only a revealing commentary on the Italian resistance, but also an insightful coming-of-age story. A bold, adventurous novel, The Path to the Spiders' Nests is animated by the formidable imagination that made Italo Calvino one of the most respected writers of our time.
Posted by Blair at 3:23 PM 8 comments