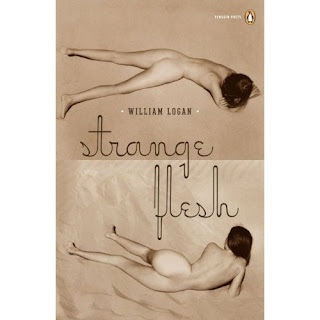 Gorgeous cover from Mark Melnick for this poetry collection. Sepia photo, oddly beautiful script type, and naked ladies? It goes against everything most publishers want in a cover! I wonder if this was a hard sell or if it sailed through the approval process?

Description from Amazon: William Logan’s dark, intense, muscular verse has long unsettled some of the standard agreements of American poetry. His eighth collection finds its home in the elsewhere, in the various small towns and ancient cities where the poet has felt some shimmering presence of the past. Logan uncovers the memory of the Leviathan in the Massachusetts fishing village where he was raised, the coupling of gods in Venice at the millennium, and signs of the Flood in Texas. He explores places familiar and unfamiliar, whether tenting on the plains with General Custer or seeing a horrific vision behind the Blaschkas’ famous glass models of the invertebrates. The inhabitants of Sodom and Gomorrah followed strange flesh; in the collapsing real-estate market of the past, this master of formality as well as form discovers the sins of the flesh that still haunt us.
Posted by Blair at 12:28 PM 12 comments