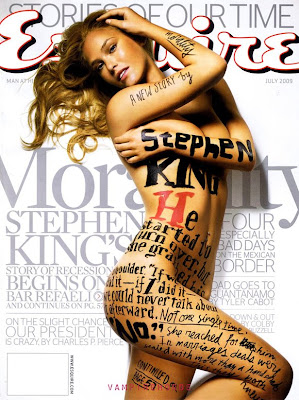 James Victore gave an interesting talk at FIT last week about his career as an illustrator and designer, and one of the most impressive things about him was his power with the Sharpie. He said Sharpie should actually pay him for all the work he's done with their product. He showed slides of this new project, done for the July 2009 cover of Esquire Magazine. Model Bar Rafaeli, covergirl of the Sports Illustrated Swimsuit issue and Leo Dicaprio's girfriend, posed naked for Victore and he handwrote the first sentences to a new Stephen King story on her body. In the slideshow, which showed the writing in several stages, Rafaeli was talking on her iPhone while Victore was writing on her. I love this cover. I actually thought it was going to be a book cover, but this is OK too. Oh, and BTW Victore didn't write on Rafaeli with a Sharpie. He went to Sefora and talked to the salespeople who at first pretended not to know what he was talking about, but when he said he needed some sort of eyeliner to write on a supermodel, they snapped to attention and turned into the most helpful experts.
Posted by Tal at 1:16 AM 1 comments 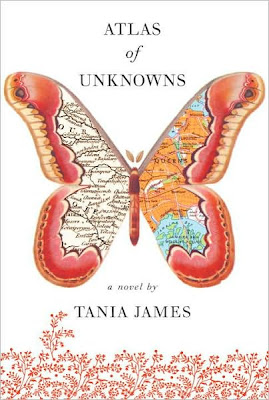 Great cover printed on uncoated paper. Looks really awesome in the window of a dark bookstore at night with a light shining on it - the dimpled paper looks cool. The wing on the right has a map of Queens, NY, while the left wing shows a map of Kerala, India. This is the story of two sisters from Kerala, one of whom emigrates to NY by passing off her sister's paintings as her own in order to get a scholarship. When her deceit is discovered, she disappears to Queens and her sister leaves Kerala to search for her. I'm not sure if the bottom pattern is supposed to evoke bindi, but it seems like the strand that is reaching for the author's name symbolizes "the hunger for independence and the longing for home; the need to preserve the past and the yearning to break away from it." (excerpt from the product description) Thanks, Ian, for the headz up.
Posted by Tal at 8:26 PM 1 comments