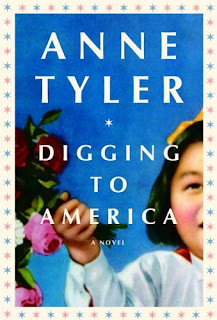 I'll admit I have a thing for saturated colors and tiny star motifs, so perhaps I'm biased, but I love this jacket. This one harkens back to 2006...it's from Knopf, but does anyone know who designed it?

From Amazon: In what is perhaps her richest and most deeply searching novel, Anne Tyler gives us a story about what it is to be an American, and about Maryam Yazdan, who after Thirty-five years in this country must finally come to terms with her “outsiderness.”

Two families, who would otherwise never have come together, meet by chance at the Baltimore airport—the Donaldsons, a very American couple, and the Yazdans, Maryam’s fully assimilated son and his attractive Iranian American wife. Each couple is awaiting the arrival of an adopted infant daughter from Korea. After the babies from distant Asia are delivered, Bitsy Donaldson impulsively invites the Yazdans to celebrate with an “arrival party,” an event that is repeated every year as the two families become more deeply intertwined.

Even independent-minded Maryam is drawn in. But only up to a point. When she finds herself being courted by one of the Donaldson clan, a good-hearted man of her vintage, recently widowed and still recovering from his wife’s death, suddenly all the values she cherishes—her traditions, her privacy, her otherness—are threatened. Somehow this big American takes up so much space that the orderly boundaries of her life feel invaded.

A luminous novel brimming with subtle, funny, and tender observations that cast a penetrating light on the American way as seen from two perspectives, those who are born here and those who are still struggling to fit in.
Posted by Blair at 2:17 PM 4 comments 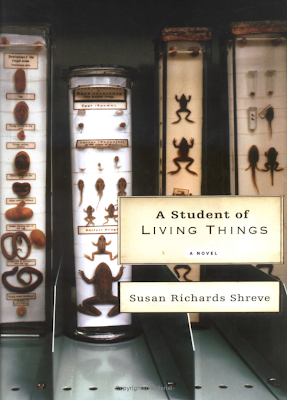 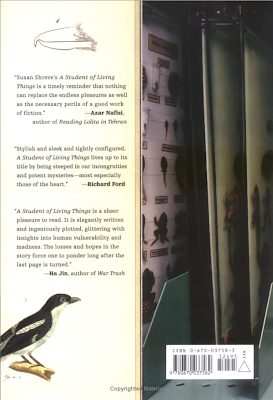 Intriguing cover from May, 2006. It's nice and creepy that the labels for the title and author replicate the labels on the specimen jars. It all of a sudden makes me feel like I'm in a bigger jar too. The story is a family drama/thriller about a near-future Washington D.C. where the Department of Homeland Security has been growing in power. A biology P.hD. watches as her brother is gunned down at their university, and sets out to find his killer - only to discover her family's dark secrets. Photo entitled "Perfect Frogs" by Justine Cooper.
Posted by Tal at 11:49 PM 3 comments