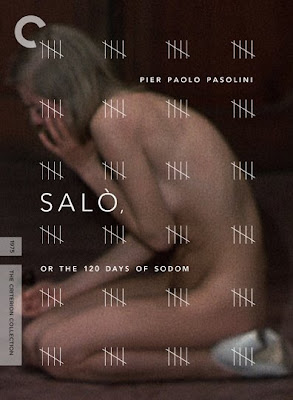 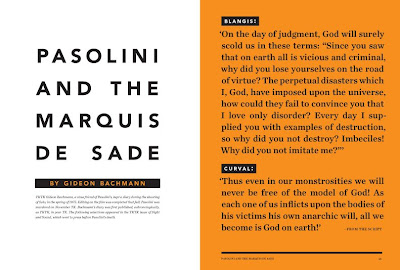 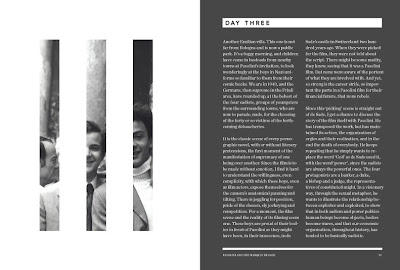 From the Criterion Collection, the DVD cover and sample booklet pages. From Criterion:
"Pier Paolo Pasolini’s notorious final film, Salò, or the 120 Days of Sodom (1975), has been called nauseating, shocking, depraved, pornographic . . . it’s also a masterpiece. The controversial poet, novelist, and filmmaker’s transposition of the Marquis de Sade’s 18th-century opus of torture and degradation to 1944 Fascist Italy remains one of the most passionately debated films of all time, a thought-provoking inquiry into the political, social, and sexual dynamics that define the world we live in."

The cover shows a still from the film, and I love how simple and effective the type is - and how powerfully it relates to the image. The repeated tick marks look like cuts, or lashes of the whip, and the type is cold, sophisticated, and merciless.

Incidentally, the director was brutally murdered when he was repeatedly mowed down by his own car. The killer was never found, even though a hustler first confessed and then retracted his confession.
Posted by Tal at 10:17 AM 3 comments 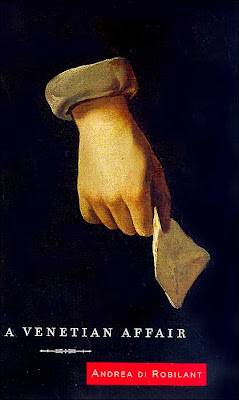 From Knopf, 2003. The image is a very tight crop of a Velasquez painting. This is a true story of the author's discovery of a cache of 18th Century love letters between a noble ancestor and a lower-class woman. "As their courtship unfolds, they plot elaborate marriage schemes that offend everyone, arrange secret trysts in borrowed rooms, cause trouble for the servants who must ferry their forbidden correspondence, and even weather an unwanted pregnancy, from which Giustiniana, with her wits and ingenuity and some crucial assistance from the infamous Casanova, emerges unscathed." (Publisher's Description)

I think this is so striking because the hand and letter are naturally set against a black background by the painter, who has isolated them with brilliant lighting. And I love the red rectangle.
Posted by Tal at 11:02 PM 7 comments