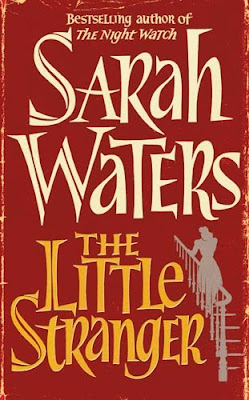 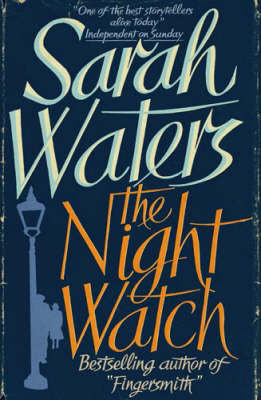 Two books by Sarah Waters, both shortlisted for the Booker Prize. As I recall, The Little Stranger was printed directly on the case, which I saw quite a bit of in Waterstone's when I visited London. Both these novels are thrillers that take place in the 1940s. I love the quirky type treatments and pulp fiction look of these covers. They remind me of Hitchcock posters and film titles.
Posted by Tal at 1:10 AM

I discovered this blog about 1 week ago and i have to admit that i love it. i am also a fan of sarah waters, via a friend of mine.

the covers are indeed amazing. i think they tell so much. when i read nightwatchers, i didn't understang the cover, but after about 200 pages in, i uderstood it.

Thanks, Sara. I haven't read her yet, but I want to. Can you tell us how the Night Watch cover made sense to you after 200 pages (without giving away too much of the story)?

spectacular lettering. What an excellent homage...

funny, but when you see this type of work in it's originality, it has less impact than when it's a homage.

The story of Night Wach is told from the end to the begining. That alone took me a while to make sense of the 3 different stories which are told (all with 1 thing in common, which I won't say what it is, don't worry!)

The cover has a dark blue, a streetlamp, the silhouette of a man a and of a woman... the colours are not the brightest/more lively ones. The conjugation of the strong blue and yellows reminded me of 'discreetness' and the silhuette of the people of mistery.

I once saw a documentary about Queen Elizabeth where someone refered that, during the second world war, when the Queen made public appearences, she wore clothes in paler tones, not because of fashion (it wasn't fashionable) but to blend in easier with the common people and also so that the dirt that was all around her wasn't seen in her clothes. After reaidn for a while, the story reminded me of that documentary and of the fact that people do things that are not immediatly understood but, given the right context and explanation, it becomes clear and simple. When you're on page 200 you understand why someone behave the way they did on page 40.

One main event that links all people took lace during the night, so the silhuette and the streetlamp also reminded me of early Hitchcock movies where the murdered lurks at the victim during the night. I am not saying that this is what happens in the book, but the feeling is the same: discreetness, secret, something forbidden, people trying to overcome difficulties...

After reading the book, the cover makes a lot of sense. I'm sorry if I couldn't me not explicit or elaborate, but it is hard to talk about something when, well, you can't talk about it so as not to ruin the book for other people.

Sara, thanks for the great insight. I really appreciate your writing in and illuminating the design - your color explanation is fascinating.

oh... thank you. i tried not to give much away. The blue of the cover was actually what caught my eye and made me by the book.