Ben Gibson: Shining at the Bottom of the Sea 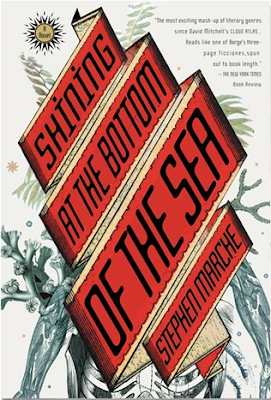 An anthology of pamphlet-literature-stories written by prominent writers from the imaginary island nation of Sanjania. The author creates an evolving dialect for his stories as they span the 19th and 20th centuries and the island goes from British colonialism to a post-colonial dictatorship. A very tall order for a book cover - but the scroll and background diagrams definitely evoke the 19th century while the font looks modern. Still, without knowing anything about the book, the cover just looks plain awesome.
Posted by Tal at 10:43 PM

Ok, you are going to be mad at me again for posting irrelevant stuff. I take the risk anyway. Here's some poetry for your consideration :
http://ecx.images-amazon.com/images/I/41en9RO4j9L._SS500_.jpg

That is gorgeous, Gould. I think Blair would like it.

Reminds me somehow of one of my favourite movie : Birth. Harry Savides's photography was beautiful.

I wonder who designed it (de Wild?) and who's the protographer.

Birth is rather awesome. It's like a Kubrick movie - but there's either something missing in it, or else there isn't enough there.

Movies are not necessarily made to satisfy oneself (blockbusters do).

Zodiac's ending was ultimately frustrating but still it is Fincher's masterpiece.

damn. Some major over design happening here. I would pic this up, but the printing better have a few tricks...